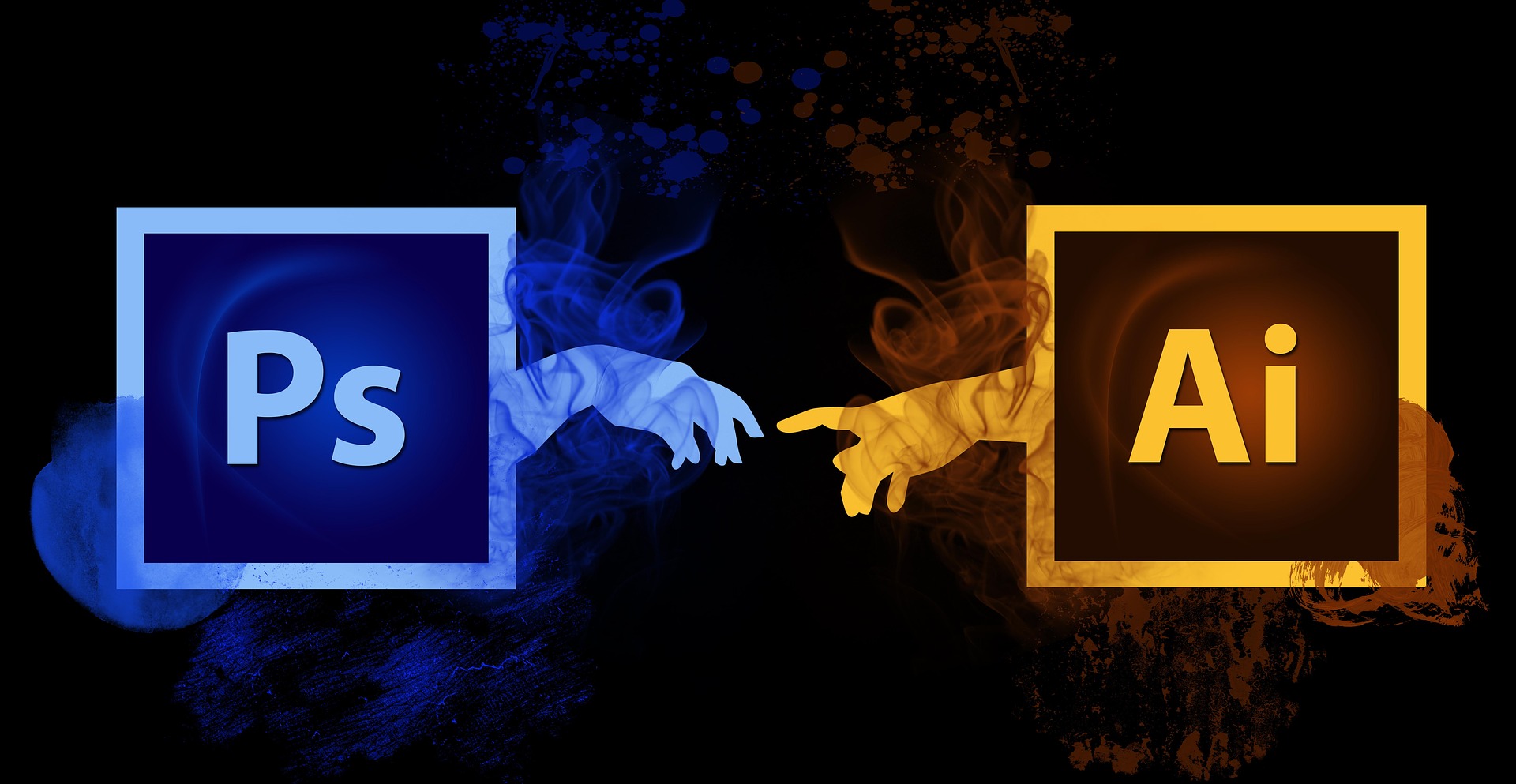 The Illustrator vs Photoshop argument and confusion rages on for several reasons. First, they have proven to be similar in many ways, even though they have more differences than most people know. In fact, unknown to many, the differences between Photoshop and Illustrator are so many that they outweigh their similarities.

Because people often think that both of them serve the same purposes, they tend to spend more time comparing and debating, which is better than employing both tools and maximizing their unique features. This article aims at clearly spelling out the differences between Illustrator and Photoshop, not to further stir any arguments as to which is better but to explain why both are programmed differently for different purposes sufficiently.

At the end of this article, you may never find the need to argue over which is better or which you prefer. Instead, you’d think more about what suits the job you have at hand best. That is, instead of asking, “which is a better tool?” you would have to ask, “Which is the best pick for this job?

Illustrator and Photoshop are two essential tools for artists, photographers, photo and video editors, graphic designers, website developers and designers, and a few other categories of visual and internet workers. But before we fully swerve into spelling differences out, we would be defining the terms involved for better understanding. Definitions may as well offer clues into the differences that lie between the duo.

Adobe Illustrator is a globally recognized software program for creating drawings and illustrations. Visual artists, illustrators, graphic designers, and website designers use this software to create professional-looking visual work. These works could be logos, posters, patterns, and fliers.

Graphics made by computers are either raster-based or vector-based. These two produce graphics differently, hence determining the significant differences between Adobe Illustrator and Adobe Photoshop. Illustrator uses mathematical elements called ‘vectors’ to create lines and curves as a vector-based software. Vectors and rasters each serve different purposes, and they would be discussed better later on in this article.

Adobe Photoshop is a raster-based software used to make or edit graphic designs, digital paintings or drawings, animation, etc., on a computer. Photoshop uses pixels to work on visuals, a major distinguishing factor between it and Adobe Illustrator.

Photoshop uses pixels to create images or graphic designs, and so its visual art falls under the category of raster graphics. Photoshop was initially made for photographers since editing, creating, and recreating images is inevitable for the art. But the use of Photoshop eventually evolved as it was found useful by other visual artists and web and graphic designers.

In all forthrightness, Photoshop serves primarily for editing photos (as the name implies, it is used to ‘shop’ photos). However, it performs a few other functions now and then based on the user, intentions, and preferences.

Difference Between Adobe Illustrator and Photoshop

Illustrator and Photoshop have their similarities and differences. Let’s dig deeper to learn more about both.

The similarities between Illustrator and Photoshop should make their differences beep louder. They are already mistaken in some circles to serve the same purpose. The features they share in common are listed below to clarify some misconceptions and exaggerated similarities further.

Perhaps as Adobe software applications, Illustrator and Photoshop have interfaces with a similar outlook. They both have a menu bar and features like alignment tools, tool palette, and color palette.

OPTIONS FOR CHOICE OF COLOR

Both Illustrator and Photoshop offer a vast array of options from which their users can select when fine-tuning photos and designs to their taste. Sometimes, we need a little more or less light shade, hue, contrast, etc. With Illustrator or Photoshop, you have a list of similar options to this effect in your editing arsenal.

Clip masking is a feature present in Adobe Illustrator and Adobe Photoshop likewise. This feature helps you insert an image into a photo or design in any direction you choose.

Their layer may serve the same purpose or work based on the same operations, but they both have layers useful for graphic designing and photo compositing and editing.

AVAILABILITY for WINDOWS AND MAC

Whether you use a Mac or a windows device, Illustrator and Photoshop are available to you, and they are relatively easy to use or learn to use if you haven’t learned already.

Differences between Adobe Illustrator and Photoshop

Without any doubt, Illustrator and Photoshop are not the same. But since they are both used for visual arts, people often contend over which they prefer. This confusion shouldn’t be, since both software applications function differently, for interlinked purposes on some occasions.

The following are the critical differences between Adobe Illustrator and Photoshop. They should not serve as points for debates but as reasons why they should be appreciated and used for their designated roles. They are:

Illustrator and Photoshop are programmed differently to serve different purposes. When programmers and software builders create software applications, they do so by programming them to perform the very purpose for which they intend it. If an application is built for digital trading, you should by no chance expect it to have Hip Hop music for download. In like manner, Illustrator is different from Photoshop because they serve separate roles.

Illustrator is specially made for:

Photoshop is made most specifically for:

As earlier explained, there are two boxes under which graphic design exists: the vector graphic and raster graphic. And that’s a big point in the Illustrator vs Photoshop comparision. The raster graphic option works with pixels, and that is the box under which Photoshop falls. Illustrator is vector-based, making it capable of changing the image form, size, layout, etc., of its designs without lessening the quality. No surprise, Photoshop is mostly used for the internet or images maintaining one form, while Illustrator can be used for either digital or print media. Whether scaling up or down, Illustrator image can never experience depreciation in quality.

Photoshop is designed to work on photos. As a result, its finished products appear more natural than Illustrator products that typically look artificially put together. This comes as no surprise since graphic designs, logos, icons, etc., can’t be as natural as photos.

Already-created images can only be modified using Photoshop. The Adobe Illustrator software has limited photo editing tools, unlike Photoshop, which specializes in photo editing.

Illustrator and Photoshop were not developed together by Adobe, and neither were they built to serve the same purpose. Illustrator was developed in 1987 and launched in 1988, while Photoshop was created in 1990.

Scaling an image up or down on Illustrator doesn’t reduce its quality. It retains its quality even when zoomed up to 900 percent; this gives an edge over Photoshop since Photoshop images often get blurry when zoomed.

Illustrator vs Photoshop for Drawing

We have considered both programs, but we need to answer, “Which is best between Illustrator vs Photoshop for drawing?”

Most times, it ends up as a matter of choice, of what every given individual prefers. Each of the software applications should work for different functions, but based on preferential bias, people tend to use them as they wish regardless. However, it is tough to blame them, given the similarities and the tremendous help both tools offer.

Some visual artists would prefer to draw with Photoshop, while others would opt for Illustrator. Although these software tools’ in-built features show what purpose they serve best, artists would always make a selection based on how accustomed they’ve gotten to one of both options. People have different expectations when using these tools, so they judge based on those expectations.

Photoshop was made for editing photos; photographers being the first group of people to make use of it bears testament. Nevertheless, it is a good platform for drawing.

Illustrator, on the other hand, being vector-based, was built especially for drawing. Illustrator’s features attest to this, as they make drawing more effortless, more effective, and exact. Even the name itself proves that it is an ‘illustrator.’

Adobe Illustrator vs Photoshop: Which is Better for Web Design?

Most newbie web designers always choose Photoshop. Since Photoshop graphics are embedded on a pixel-based bitmap, most designers consider it the first choice for web designs on social media.

Contrary to popular belief, in web design, Illustrator has some advantages over Photoshop. Most notable is that Illustrator trumps Photoshop in designing a user interface. It performs this function faster. You can also use Illustrator’s symbol panel to create a library of icons and other reusable components.

However, Photoshop gives a more consistent design than Illustrator. It also trumps Illustrator in responsiveness and graphics. For this reason, Adobe Photoshop is a better option for designing websites.

If you consider an app for drawing then check our article The Best Drawing Software.

Should I use Illustrator and Photoshop Together?

Illustrator vs Photoshop are not practically competitors. On the contrary, they complement each other to play their unique roles.

That said, you may prefer to use one of both software tools, but they would serve you better once you’ve understood their different wirings and choose to use them in a manner that complements each other. Thus, there are situations when it’s best to use Illustrator and Photoshop together.

As a photographer, you may need to add drawings or illustrations to specific photos. And as a graphic designer, you would usually need to work on images in the way Photographers do at times.

Images may sometimes need to pass through Illustrator and Photoshop in your editing and create process, making it necessary to employ both applications when your work demands it.

Additional plugins give software programs an edge that enhances their efficiency. Let’s take a look at the different kinds of tools and plugins available for Photoshop vs. Illustrator.

Adobe illustrator started supporting the use of plugins in 1997 when they released Illustrator 7. The plugin conferred on the new release additional functionalities that it didn’t have in previous versions. The plugins include:

Cineware comes in handy for designers who need to integrate 3D videos and other 3D elements to enhance their designs’ view and lighting.

With its one-time subscription package, this program bundle allows access to all of its plugins. It comes with features like live snippet effects, intuitive vector sketching, etc.

The Fontself plugin allows you to create custom fonts if the existing fonts do not impress you or are not suitable for your designs.

This plugin is a treasure reserved for designers who love to experiment with shiny texture. If you’re unable to find the appropriate glossy texture to incorporate into your designs, Gold Rush allows you to create a metallic glitter texture suitable for your design.

Photoshop introduced plugins in 1991 as it became apparent that the stock plugins couldn’t offer all the functionalities that creators need. Here are the most used Photoshop plugins and their functions:

The Pexels plugin provides a vast pool of stock images that creators can import into Photoshop for their designs. They can add additional effects using default Photoshop tools or other plugins.

This plugin presents a plethora of colors stacked in a palette. It is ideal for performing duotone-based graphic projects and other projects that require advanced coloring.

FontSelf serves on Photoshop the same function it performs on Illustrator. It allows designers to create customized text fonts as suitable for their projects.

Aurora plugin for Photoshop improves the resolution and definition of image or video during editing. HDR photographers find this plugin especially useful in enhancing their projects and getting better results.